[pullquote align=”normal” cite=”My old Porsche website on CIx in the days of html websites and page counters”]So I found this old Porsche website I did around 2000. Hard to believe its sixteen years ago… Lots of waffle about Porsche 911 History and decided to repost it just in case its of interest?[/pullquote]

1956 The first studies of the 911 began. There were a lot of prototypes but they were really ugly and the back of the car was the part that have demanded the most of work. 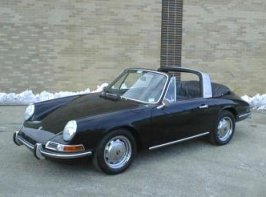 1966 Introduction of the 911S. The engine was optimised to develop 160hp. The structure was also reinforced. The car was featuring new alloy Fuchs rims, a part of the Porsche legend. Targa model is now available.

1967 A true 911 sports was introduced with the introduction of the 110hp 911T. So there were Touring, Normal and Sport model. The 911 T was made for road touring, not for race circuits.

1968 First radical evolution, all 911s now have a longer wheelbase, now 2,271mm.A new transmission appeared on all models. Called Sportomatic, an Automatic with a gear stick but no clutch pedal.

1974 Because of American safety restrictions, the 911 is equipped with new higher and bigger bumpers. More flared wings and 2.7L engine with K-Jetronic injection : the 911 is really transformed visually. The T model doesn’t exists anymore, it is relaced by the 911 giving 150hp. The 911S is now at 175hp and the Carrera features the engine of the Carrera RS. The Carrera RS 3.0 is available with 230hp

1975 The 911 series is left unchanged. But this model year is marked by the appearance of arguably porsche’s most famous vehicle. The 911 Turbo (930) is introduced. The fantastic engine producing  260hp. At this time, the most powerful and fast car Porsche has built for road usage. The reinforced 930 transmission has 4 speeds.

1976 The S model is retired. Standard 911 now gives 165hp. Introduction of the 200hp Carrera 3.0. This is another milestone year in Porsche history since bodies are now galvanized, against rust that was a major problem in the previous years.

1978 Porsche (foolishly) decided to cease production of the 911s. To gently phase out the 911 they  proposed the 911 SC (Super Carrera). The first 3.0L model developed 180hp. The Turbo received a 3.3L engine and an intercooler. As a result, 300hp and more sensations than on previous model. Of course suspensions, wheels, brakes, body, transmission are adapted to the huge power. Last year of the Sportomatic gearbox.

1981 The end is near for Porsche’s 911.But, the public continue to order 911’s in ever increasing numbers! So, death of the 911 is delayed and the last SC model receives 204hp and a study for a Cabriolet is launched.

1983 After a prototype presented at the Frankfurt Motor Show, the 911 Cabriolet is now available

1984 Customers are too attached to the 911 to leave her here. So Porsche decided to continue production and development for at least another  13 years. The new model called Carrera 3.2 has 231hp and that’s the first Porsche to have Motronic electronic injection. This new Carrera is also available with the Supersport option. 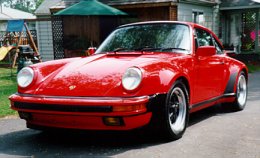 1988 To end the carrier of this wonderful car, Porsche proposed the Speedster. Turbo models are now available with Cabriolet and Targa bodies and five-speed G50 transmission

1989 A new 911 appeared with the 964. New look with integrated front and rear bumpers, new 16″ Speedline rims, 3.6L engine giving 250hp. The car was 4WD and it was named Carrera 4. Old models were still available. A Carrera 3.2 CS (for Club Sport) was available with reduced weight and firmer suspension.

1990 The Carrera 2, wilder than Carrera 4 but the progress realized by Porsche engineers compared to a 3.2 is enormous : better handling, braking, response but moreover better comfort, ventilation and so on. A new automatic transmission called Tiptronic was available on propulsion models. Another milestone change is the introduction of the Tiptronic gearbox, making it possible to shift a gear using two buttons on the flywheel. There were no Turbo model this year. 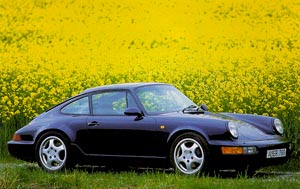 1991 Porsche introduced new turbocharged model called 965. With a 3.3L engine, the car has 320hp and is heavier than previous 930. As a result, it isn’t as fast but is easy ands more comfortable to drive. Huge flared wings, new 17″ Cup rims, rear whale tail, you can’t miss it !

1992 The 964 Carrera RS 3.6 is available. Lighter, more powerful, this car came directly from competition. If the engine only has 10hp more, the lightweight and the savage behaviour really made the difference. The weight of the RS, 381hp in the turbocharged 3.3 engine combine to give you some challenging times.

1993 A new 965 arrived with a 3.6 engine that time. 360hp, beautiful rims and 285kph. To end the 964/965 series, there were a lot of anniversary models : Carrera 4 with Turbo body, Speedster with narrow or large Turbo body, 911 exemplars of a Carrera 2 with all options and 911 script on the rear. On September, Porsche announced the new model called 993. Very beautiful with more fluid lines, new rims, new interior and a totally new rear suspension that have very improved handling qualities of the 911. The 3.6 engine now produces 272hp.

1995 The 993 Turbo. With twin turbo 408hp engine and 4WD, that’s the most powerful and the better handling 911 ever built. There are improvements everywhere, that’s a little miracle of technology and comfort.
The Carrera 4 is made available with Turbo’s body and chassis. That’s the Carrera 4S. In my opinion the most beautiful Porsche to date.  There’s also the 993 Carrera RS 3.8 featuring the bigger normally aspired engine on a 911. 300hp for only 1,290kg, dynamite performance with limited comfort. Vario-cam is now fitted to all models giving 13hp more to reach 285hp.

1997 The Carrera S with Turbo’s body and wheels. The car is announced with RS engine and traction control for a little extra. Porsche also propose the Turbo S with 424hp, all options as the ultimate Porsche 911 of the century.

1997 The new 911 is available with heavy modifications : elements of the Boxster and water cooled 3.4L engine giving 300hp. Maybe the best handling 911 ever made.

1998 The 996 Cabriolet. Serial hard top and all the qualities of the 996. New 996 Carrera 4, the most sophisticated and secure 911 in history. Revolutionary PSM system for enhanced handling on wet surfaces. Available with six-speed manual transmission or five-speed Tiptronic for the first time due to the new disposition of the front differential system. Coupe or Cabriolet.