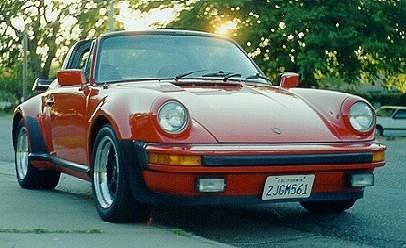 So I found this old Porsche website I did around 2000. Hard to believe its sixteen years ago… Lots of waffle about Porsche 911 3.2 Carrera and decided to repost it just in case its of interest? 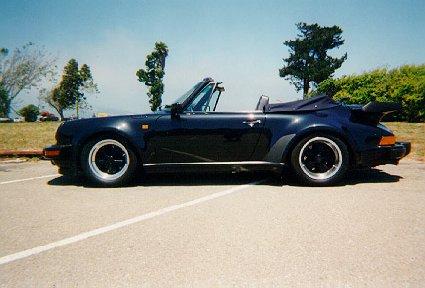 Porsche also introduced their short shifter in 1985. There reason for shortening the shift travel was to avoid having the shift lever scrape the seat going into second gear when the car had sport seats. They shortened the shift travel by about 10% by moving the pivot point up by 4 mm. Starting with the 1985 model Porsche also using Boge GZ double-tube gas pressure shock absorbers as an option to the Bilstein single tube gas pressure shock absorbers as an option on the Turbo Look cars. The oil cooler was changed to a finned radiator type cooler. To provide extra airflow the opening in the front bumper was increased in size. This change was to provide a reduction of about 20~ C while driving at full load. Some Porsche customers had experienced engine failures when driving at full speed on the autobahns. Electrically operated central door locks were also added in 1984. The telescopic fender mounted antenna was replace with an active radio antenna which was mounted in the windshield.

Cabriolet top. 1986 was the first year that the Turbo fenders, with their fender flares, were made one piece for the front and rear instead of welded on flares as they had been previously. 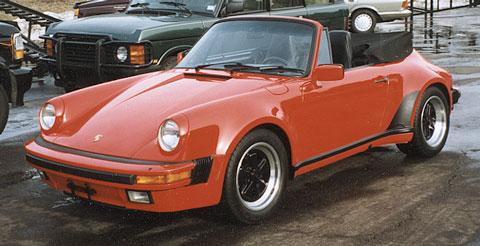 The 1987 Carrera had a completely new five speed transmission, Type Code G 50, which utilized Borge Warner synchronizers for smoother shifting and improved durability. The clutch was increased from 225 mm in diameter to 240 mm to cope with the increased power of the larger 3.2 litre engine. The new larger clutch was also now activated by a hydraulic master and slave cylinder. The rear torsion bar tube has a bent centre section to provide additional clearance for the transmission. The additional clearance is required for the new clutch disc with larger rubber damper centre section. The 1987 911 Carrera and 911 Turbo had new headlights that are optically standard for R.o.W. and USA. 911 Carreras equipped with a catalytic converters had an additional electric blower mounted on the oil cooler in the right front wheel housing to prevent excessive oil temperatures. The fan is controlled by a temperature switch which is mounted in the top of the oil cooler. This switch turns on the fan when the oil temperature reaches 118~ C (244~ F). The power curves for the US version of the engine were upgraded to 217 DIN horsepower at 5900 rpm. and peak torque to 195 lb/ft at 4800 rpm.

Porsche also decided to put better brake system on the Carrera 3.2 : it received 282x24mm front and 290x24mm discs rear (instead of 282×20.5mm and 290x20mm). Pistons of the rear brake callipers increased to 42mm (as front ones) and to prevent wheel locking under big braking (which is very frequent with same pistons’ size front and rear), a pressure regulator get added to the rear brake circuit. Finally, the servo brake diameter reached 8 inches, as on the 911 turbo.
For the first year of the model, the chassis hasn’t been improved. The wheels and tyres size were similar to those of the 911 SC (185/70 VR 15 on 6J15 front and 215/60 VR 15 on 8J15 rear). Modifications will come in 1986 when Porsche equipped the Carrera 3.2 with Bodge twin tube gas shock absorbers. The front sway bar diameter raised from 20mm to 22mm and the rear ones from 18mm to 21mm. As an end, rear torsion bars now have a 25mm diameter instead of 24.1mm.

Possibly one of the most noticeable *driving* aspects of the 3.2 Carrera is because Porsche decided to produce a new transmission : the type G50 gearbox. This gearbox use modern Borg-Warner synchronizers for better shifting. The diameter of the clutch is enlarged from 225 mm to 240 mm and the command now use hydraulic mechanism more than previous cable one. As a result, the effort produced to operate clutch are less important and the shifting operation is more comfortable to execute. The look of the Carrera 3.2 is very similar to the previous 911 SC and few details can make the difference : rear logo on the engine lid, integrated fog lights in the front spoiler, new ‘dial’ wheels and since 1987, the integration of rear fog lights into the rear headlights strip lead to the modification of the Porsche logo. Previously black and big, it gets to the colour of the red rear strip. But compared to the 911 SC, the car was more powerful and the behavior was improved. Moreover, the Carrera 3.2 is a more luxurious car with a new ventilation system, new seats and interior modifications.
Previous Post A potted Porsche 911 History – 1956 to 1999 Next Post The very saucy Porsche 911 3.2 Carrera Supersport (aka M491 TurboLook)