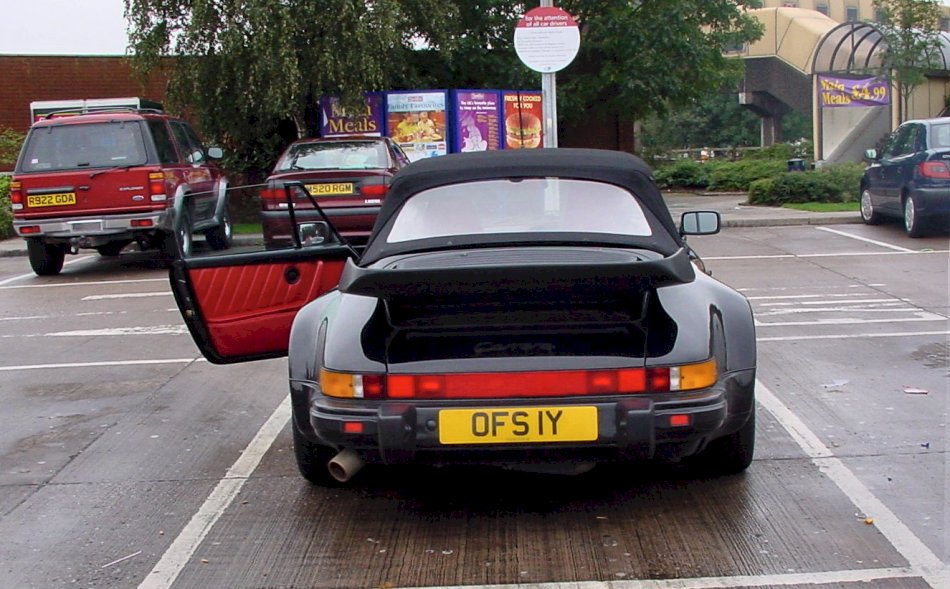 So I found my old Porsche website I did around sixteen years ago… Lots of waffle about Porsche 911 3.2 Carrera and especially my old 1988 911 SSE (the famous Porsche 911 Supersport). Much loved and very regrettably sold when I left England…

If you want to drive to work (even on the wettest, coldest, darkest and most miserable mornings) with a huge stupid grin plastered across your face then this is the car for you.

Most people ask “Porsche Supersport… I don’t think I’ve heard of that one?” Well, quite simply the Carrera SSE (Supersport) is the 911 Turbo without the Turbo!

This was a special order, Porsche option number M491, and was introduced for the 1984 model Carrera and ran through till 1989. The only description offered against this option code is a handbook reference to ‘Turbo Look’. It’s registered as a 911 Carrera but more commonly referred to as a Supersport (or a Turbo Look or even a Wide Body) to distinguish it from the standard Carrera.

Confused? Well, lets try and clear it up then…..

Other options are the same as the 3.2 Carrera.

Porsche, There is NO substitute.

Porsches! You just can’t touch them. The Internet is filled with websites discussing their merits. Young boys shout “Nice car mate” as they drive past. Young men eye them enviously. Old men moan about a lost youth. Enthusiasts spend an unhealthy amount of time looking at them, polishing them, preening them and reading about them. But, ultimately you can only experience Porsche by driving them.

If you want to experience real life racing car excitement and yet still maintain reliability, practicality, and have a car that you can drive to the supermarket to get your groceries (granted – you will probably get there quicker than most) then Porsche is the only way to go.

This 911 is my 4th Porsche, and certainly wont be my last. So far I have been lucky enough to owned:

My first Porsche was a 944 S2. It drove superbly, had great styling and had more ‘seat-of-the-pants’ torque than anything I had ever driven before. But, sadly, as time went by a number of problems crept up. One week it would be the brakes juddering, then the wind screen wipers would pack up, then the headlights stopped flipping up, then the battery ran flat (in a day!) because of a short in the alarm system, then a pinking problem turned out to be the EMS (Engine Management System) a *cough* sturdy amount of money to replace. Just when I had it all running nicely, the annual service turned up warped front  wishbones! The threat of the required overdraft meant that my porker just had to go.

So, I went on the trail of a nice, reliable, cheap, sporty, Japanese number. Unfortunately, at that time I didn’t realise that I was infected with a very common strain of Porscheitis. This particular virus causes irrational urges to look in Porsche showrooms, scouring of the car mags checking the second-hand Porsche prices and of course wandering off to every Porsche site on the Net (just to browse – honest!).

Needless to say, three months later, dozens of flower bouquets for the wife and a very hefty bank loan later I took possession of a…

The 968 was a fantastic car. Very similar car to the 944 with very small improvements in lots of different areas. The 968 was the replacement for the 944. The 944 had evolved slowly during it’s 10+ year life span with the final model, the 944 S2 being discontinued in 1992. Then came the 968 which was itself replaced by the Boxster in 1997. The 968 was the last of the 4 cylinder liquid cooled Porsches and, in my opinion, the very best.

The 968’s 3.0 litre 16v engine delivers 240 horsepower, making it the world’s most powerful normally aspirated 4 cylinder. This power, up from 208 in the 944S2, arrived partly from VarioCam which uses a camshaft chain drive with an adjustable tensioner to retard intake valve actuation up to 7.5 degrees. This results in lower exhaust emissions, more horsepower, and better torque. The 968 is an attractive blend of both Porsche marques. It still has the overall look of the 944, but I personally think it looks more like a cross between the 944, 928 and the 993 bodied 911. The body styling changes are fairly minor and include a marginally longer (a whole inch) body with (believe it or not) creates a much sleeker smoother finish, rearranged air-intakes, 993/928-style popup headlamps, a restyled backend including American style neutral density tail lights with red lenses, and the 968 lettering embossed into the boot.

My first Porsche 911. This car was a beautiful Black 911 Supersport Cabriolet with grey leather interior. Mileage was quite high at 110k, but overall the car was in good condition. I enjoyed this car for a total of eight days. Yes, you read correctly – 8 days before some thieving scumbag stole it!

Gutted! Doesn’t even come close to describing how I felt. But after four long months of legal wrangling with the insurance company, eventually they paid up and I was back on the 911 trail. Even Eight days is enough to hook you on these magnificent cars.

So, after much searching I came across favorite Car – license plate OFS1Y.

Every morning, slipping behind the wheel brings a smile to my face. Hearing the starter motor cough and the engine growling into life turns the smile into a grin and then there is first, second, third… The only time the grins fades is when you arrive at your destination.

Having a Porsche is less practical than a 7 seater family car, its slightly thirstier and servicing is more expensive. But you should accept these limitations just to enjoy the Porsche Experience, the GRIN factor, more than makes up for any perceived limitations associated with these marvellous cars.

If you are thinking of taking the plunge into the heady world of Porsche ownership: Think long and hard, because once you’ve got the bug, there is No going back…….