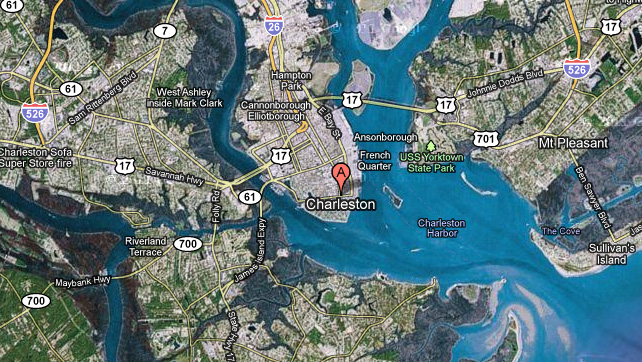 Since emmigrating to the USA in 2008, I’ve worked all over the place and used the time to explore this great big country: Virginia, South Carolina, Georgia, Nevada (Vegas Baby!), Texas and California. Great memories of each state and the marvelous cities I’ve lived in. Normally spending between 6 months to a year in each location has given me a great opportunity to see the sights and discover what I like, where I want to be and the people I want to be part of.

Charleston has a special charm.

According to Travel and Leisure magazine:

Urbane but quaint: This South Carolina city won the survey by balancing sophisticated tastes with small-town charm. Charleston is home to four out of the survey’s top five small-city hotels in the U.S.: these boutique hotels tend to be rehabbed mansions, like the former cotton-baron homeWentworth Mansion, or the antiques-filled Planter’s Inn, which dates back to 1844. Planter’s Inn is also home to one of the best low-county restaurants in the city: Peninsula Grill, where you can start with oyster stew and wild-mushroom grits and finish with its signature coconut cake. Not only did these hospitable South Carolinians rank highly for their well-crafted local cuisine, but they also landed near the top of the survey for likeability.

Chucktown is calling me… home.

I’m going to be calling Charleston my home.

I randomly saw this Swarook video a couple of months ago – it had a few thousand views. I was caught between laughing, cringing and watching it with plain open mouthed incredulity. The worst reflection of the shallow end of American life.

I then binge watched all of the author videos – the guy is called SWAROOK and has a really amusing video style. He definitely opens himself up to youtube-land and I was thoroughly enjoying watching his videos explode on youtube. His bike rage video quickly went viral. Possibly because of the explosive verbal tirade between him and the car driver. Comical and embarrassing to watch.

Then some personal schnizzle happened and he took all his videos offline….. not before I snaffled a copy of my fave – this road rage explosion in a walmart carpark in Denver, Colorado.