After a looooong wait my Wolf under seat exhaust turned up (Wolf delivered it 6 weeks late!). Fitting was fairly straightforward as long you follow the instructions step by step — it did take up most of a Saturday afternoon, mostly due to my pitiful knowledge, sausage fingers and lots of head scratching. But the finished article is great. 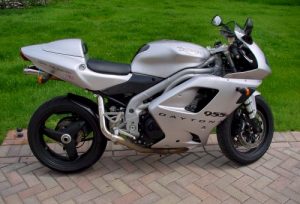 It looks superb IMHO and sounds… well… it now sounds like a real motorcycle!

The exhaust is delivered with the baffles as an optional extra. I fitted them because the unbaffled sound was a little harsh and actually prefer the noise level with baffles fitted. Very little difference to tell the truth but the baffled version sounds a bit deeper – which is my favourite type of noise.

It sounds *slightly* louder than the OEM Triumph Race can *but* shouldn’t offend Plod when at lower revs. It has a terrific deep burble and howl sound when it’s opened up. When you roll off the throttle it pops, spits and snarls like a wild animal.

I recorded a short video with full sound if you want to listen to the exhaust at tick over and removed the pillion pegs on my bike, but there is no reason why they cannot be refitted. 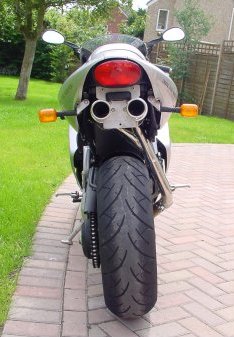 The Wolf was £900 with the anodised titanium end cans. End cans come in stainless, titanium and carbon flavours. The system is all well built and looks like it will stand the test of time.

Fitting was a bit of a pain and certainly took me much longer than the 3 hours recommended in the instructions.

then fit all the new stuff: 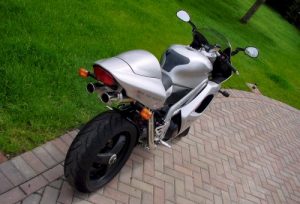 I found the Wolf Underseat Fitting Instructions a little ambiguous, they don’t clearly explain what all the components are, but with a little patience and trial and error – it all fits simply enough. It wasn’t a difficult task just time consuming and detailed.

IMPORTANT: Pop down to your local Triumph dealer and get them to load the ‘Triumph Race Tune’ into the Bike ECU… Jeeezuz!!!!! What a difference. Combined with the under seat exhaust the Daytona is now riding like a completely different bike. Flat spot has vanished.. Power seems to come on early and just increase throughout the entire rev range. My seat of the pants estimates would say that it feels 20% faster everywhere. 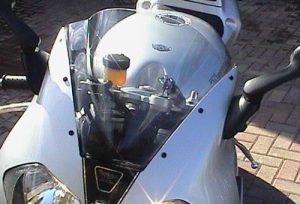 Not sure if I love it yet… but a change is as good as a rest as they say.

Yeah, we did it again, it was just as fantastic those highland routes are still probably the best roads I have ever ridden in the UK.

Land’s End to John o’ Groats is the traversal of the whole length of the island of Great Britain between two extremities; in the southwest and northeast. The distance by road is 874 miles (1,407 km) and takes most cyclists ten to fourteen days; the record for running the route is nine days. Off-road walkers typically walk 1,200 miles (1,900 km) and take two or three months for the expedition. Two much-photographed signposts indicate the distance at each end.